I was tagged on this blog tour by author Maggie Gilbert-Thanks Maggie :)

The lovely Maggie's writing process can be found by clicking Here

Hi folks. I'm so pleased to be able to share my writing process and techniques with you all. It's  made me sit down and think about how I create and develop a story. Here goes... 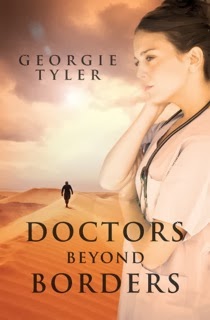 2) How does my work differ from others of its genre?
I'm not sure the formula differs too much in romance; girl meets guy (depending on your persuasion it could be girl meets girl, guy meets guys or girl meets two guys and so on. The possibilities are endless!) there's conflict and they still fall in love and live happily ever after. My debut novel available on the virtual books shelves DOCTORS BEYOND BORDERS probably differs from most other books of the same genre when it comes to the locations the book is set in. It's about two doctors who work for  Medecines Sans Frontiers in Sudan amidst the famine, drought and war. The other exotic locale my characters wind up in is Mykonos. I guess I've never read a book based in Sudan. Many people who have read it have made the same comment.

3) Why do I write what I do?
I have always been quite an avid reader and read across genres. However, I love romance novels because I love the idea of being in love. Romance is relatable, it's beautiful even when the characters are in their deepest, darkest place because you know love will always help them find their way out!

4) How does my writing process work?
A seasoned Australian writer, John Larkin told me once that writing is 90% perseverance 10% talent and if you don't have bum glue on you desk chair then the book isn't going to get written! The flimsy, romantic notion of sitting in your kaftan, by the beach with your labrador punching on your typewriter keys is not the way it really goes down. I'm going to quote the man again: good writing is  rewritten.

My writing process begins with an idea, then I scribble a plan in a notebook or A4 paper, create my characters and breathe life into them by sitting indoors from the moment I've dropped the kids off to school.  I have a laptop and we move around the house. You can find me at my desk, or at the kitchen bench, my bed or the couch! But some of my best lines come to me in the car!

Sometimes, by the time I have to do the pick up run or ferry whoever to whatever activity I haven't unstacked the dishwasher, made my bed or even had a shower! It's true. Rest assured this doesn't happen every day and I always squeeze the shower in before I leave the house!

Writing is really hard work but worth every word. I'm a new kid on the block so the learning curve has been steep. Very steep. However, I have met some wonderful authors who are so supportive and willing to assist in anyway they can. So many of my friends and my dear husband have been wonderful too! They've given me such confidence and get up and go. It keeps me writing and I don't think I'll ever stop.


Caitlyn Nicholas
Caitlyn Nicholas is a Sydney-based author, blogger and stay at home mum. She lives with her two beautiful girls, a magical black cat (who is 18 years old and still catching mice), a gold plated Cavalier King Charles Spaniel (who likes to eat bees and be rushed to the vet), a long suffering husband (who is an excellent proofreader), and four chooks (who enjoy digging up her vegetable garden). Caitlyn began writing in 2005. Exhausted, pregnant and coping with a demanding toddler, she decided the time was right to embark on a writing career. To her family’s eternal startlement she is now the author of four novels, a short story and a novella. Her debut novel and the first manuscript she had ever written, Running Scared, was published in January 2007. Her second book Secret Intentions was published in 2009. Drive Me To Distraction was published in November 2012 and her novella The Danger Game n December 2012 and Pursuit was released in 2013.

Michelle Ziegler
Michelle writes sweet, witty contemporary romances. Her imagination started spilling out onto paper the second she could scribble. If life could be written, Michelle would write everyone’s ending as a happily ever after.
She grew up in Chicago and later moved to Colorado. Her husband still makes fun of her Midwest accent. By day, she is an engineer, wife, and mother to two kids and two dogs. Her sanity survives with the pages she writes, even if her toddler is trying to drive her to the edge one temper tantrum at a time.