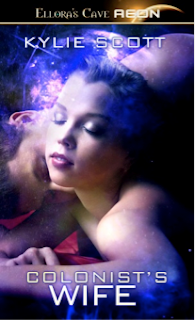 Welcome Kylie Scott back to the blog with her latest release COLONIST'S WIFE, exploring new frontiers with her first Sci-Fi romance. To celebrate its release, Kylie is giving away  a digital copy to one lucky reader! All you have to do is post a comment telling us what your all time favourite Sci-Fi movie is and why. Don't forget to leave your email address.

I loved this book, the characters and always the shower wall! Read on, you'll see what I mean.Take it away Kylie...

There’s a lot to love about science-fiction. New frontiers. Brave souls venturing forth. All that sort of stuff. It’s westerns for people that are more into ray guns than horses. Why have a good old gunfight at high noon when you can have X-Wing fighters going hard at it against a spectacular back drop of stars and planets with the orchestral music swelling to enormous, nerve shattering proportions? Actually both genres are rather awesome, western and sci-fi. But I grew up watching Star Wars, so sci-fi wins for me. Not that I even have spectacular space craft duking it out in this book, which might lead you to wonder what I’m even going on about. Bear with me just a little longer, while I explain. I like the grit and grime of settling a new world. The challenge of carving out an existence in a hostile alien habitat. Not that I even have aliens in this book. Damn it. But I have a moon and a space base and people making a new home on the other side of the galaxy. I’ve got a mail-order bride in a truly shitty situation and a gruff, scruffy war hero who just needs a really good cuddle or three. Hard against the shower wall, even. RAWR. You know ... whatever works. I’ve got two unlikely people bravely, fortunately going where billions have gone before. No, not the shower-wall. That’s only for couples blessed with really good balance. I mean they’re falling in love and finding a new hope in one another. I guess that’s what I love about both romance and sci-fi; they’re both about hope for tomorrow.

It’s 2088, and having testified in a gangland murder trial, nowhere on Earth is safe for Louise. Witness Protection has organized a new identity and a marriage contract for her on the mining colony of Esther, one of the moons circling Jupiter. The man who meets her there is not the groom she expected.
Adam Elliot is neither sweet nor sincere, and he looks like he was hosed off a barroom floor. But soon a memorial service reveals Adam’s soft underbelly. Throw some stellar sex into the mix and the two decide that maybe marriage to each other might not be so bad after all.
But an assassin is already at work. A deadly game of cat and mouse ensues on the planet’s frozen surface. Louise is determined to live long enough to draw the maniac away from the husband she just might have fallen for.

The wife was asleep, exactly how he’d planned it. Adam crept in, careful not to disturb her. He sank down onto the end of the bed, so damn tired his bones felt brittle, sapped of energy.
Taka had sat with him for hours, playing endless games of chess and sipping sake long after Rose had gone to bed. And she had gone there with her pretty nose out of joint. The state of his marriage as a topic of discussion had got old fast. Apparently the woman hadn’t met Rose for her tour today despite repeated com requests. As if it was his fault his wife was antisocial. Actually, he could almost appreciate that. Or at least understand it. She might be overwhelmed by all the changes.
But no, he hadn’t wanted to discuss his wife or their supposed marriage. Rose had thrown her hands in the air more than once. Taka had raised a brow but said nothing. He’d continued to say nothing until Adam had stumbled to the door, a bit inebriated. Again.
“Give it a chance,” his friend had said.
But was that what his wife wanted?
Adam set a hand back on the mattress and let his head roll onto his shoulder, let the lethargy take him. So damn tired. The low lighting cast shadows but her face seemed clear and softer in sleep, filled with none of the disappointment or distaste of their meeting yesterday. She slept on her side with a hand tucked beneath her cheek like a child. But her other arm lay on the bed, curled up and around her head as if she were hiding herself or guarding against attack, expecting it.
Curious. Adam shuffled farther onto the bed to get closer.
There was a scent, luring him in, inviting him closer still. The bare curve of her shoulder lay right there, so he leaned over and sniffed. No one would know. Citrusy, lemony—who knew? It was nice. He breathed deeply again and again.
Louise made some small noise and rolled onto her back. The hand guarding her head rose and her palm flattened against his chest. Adam held perfectly still, didn’t even dare to breathe. Her fingers pressed into him, not hard enough to push him away, more as if she were stretching, kneading.
Her eyes opened, big and dark and sleepy. “Adam?”
“Yeah.” He hovered over her, frozen. In truth, he couldn’t have moved to save himself and he couldn’t have said why.
The hand dropped from his long-sleeved T-shirt but her drowsy gaze remained on him. She wasn’t awake. Not really. He shouldn’t have disturbed her. Sniffing her while she slept. What the hell had he been thinking?
“It’s okay. Go back to sleep,” he said.
She said nothing, dark eyes peering back at him.
“You’re safe.”
“Okay.” The eyelids drooped and she turned her head away from the light and him.
Adam crept off the mattress, eyes on her the whole time. The stranger in his bed, for better or for worse. His wife, courtesy of Gideon dying and a contract signed before either of them had ever met. How binding could it be? What did such a joining even mean?
She looked so soft in sleep. He lost track of how long he stood there, staring at this wife.