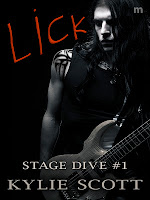 Waking up in Vegas was never meant to be like this.


Evelyn Thomas’s plans for celebrating her twenty-first birthday in Las Vegas were big. Huge. But she sure as hell never meant to wake up on the bathroom floor with a hangover to rival the black plague, a very attractive half-naked tattooed man, and a diamond on her finger large enough to scare King Kong. Now if she could just remember how it all happened.

One thing is for certain, being married to rock and roll’s favourite son is sure to be a wild ride.

I couldn't put down Kylie Scott's latest book, Lick. Am sleep deprived but it was well worth it! The story is a classy mix of uber rockstar cool, young love and of course hot sex. Evelyn and David's story starts in Vegas. What went on in Vegas certainly didn't stay in Vegas as Ev was catapulted out of her ordinary life into the extraordinary world of rock star fame. I loved the honesty between the two main characters and rawness of their attraction amid everything going on around them as they struggled to come to grips with something they had never felt before. A must read.

Kylie Scott is back on the blog. Lick her newest release has had rave reviews, not just from me but those people who review books for a living and it is hurtling up the charts. Keep reading and find out a bit about what makes this author tick.

Author Bio. Who is Kylie Scott?

Oh, she’s despicable. No, truly, you wouldn’t believe the crap she gets up to. Actually, I’m an Australian romance writer with a predilection for sweet, gritty, smutty stories of all sorts. So long as they feature hot men, I’m happy. I write the Flesh Series, about survivors Post-Zombie-Apocalypse, and the Stage Dive series, about a rock band. All have HEA’s.

Lick is about a girl who goes to Vegas to celebrate her 21st birthday, drinks ALL the drinks, and wakes up married to a rock star. Whether or not they should stay married is the question… It’s sort of a reverse romance. They start out married and then get to know one another.

What inspired you to write Lick?

I’d been reading some New Adult books and liked the themes they dealt with, all the issues inherent in that period of your life when you’re learning how to take responsibility for yourself and becoming an adult. Also, I’ve always been nuts about rock music. Combining the two appealed to me.

Tell us about your main characters Evelyn and David.

Evelyn is a good girl with a spine. She’s curvy, and like most women, has the odd insecurity about her body. But she still knows her worth. She isn’t exactly sure what she wants to do with her life just yet.

David is a guitarist in a big rock band. He’s become jaded by the whole rock and roll life style but still has a huge passion for music. He’s talented, loyal and smexy.

What do you love about this book?

I love how my heroine, Evelyn, turned out. By the end of the book she’s most definitely begun to grow into herself. I also love the chemistry between these two characters. The sex scenes were a lot of fun to write. And I love all of the boys in the band, especially Mal. His sense of humour is pretty off the wall.

Are you a head banger or do you prefer a raunchy, rock ballad?

Ha! You know it’s a little sad, but I probably am more of a rock ballad girl than a mosh pit head banger. “Patience” by Guns n Roses and “Never Say Goodbye” by Bon Jovi were huge when I was in High School. Remember those?

My favourite scene is probably still the start of the book when Evelyn wakes up hung-over on the bathroom floor with her whole life upended. She’s a mess…so clueless.

Here's where to find it: