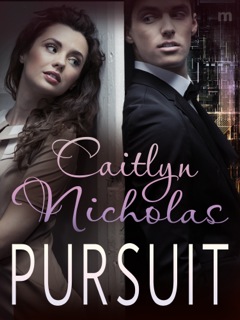 I'm so happy to welcome my buddy Caitlyn Nicholas back to the blog with her brand spanking new book Pursuit released today. Yeah, I've read it and I loved it. Congratulations Caitlyn!

Pursuit is a delving, gripping read. Dimity Pond is a very clever computer hacker running from the law. But that is the least of her problems...
From page one the reader is drawn into a web of intrigue that this author weaves so well, intertwining the remnants of IRA hostility with the Global Financial Crisis and the fall of the English banking system. Only Dimity has the ability to save it. But who can she trust? Having been left high and dry by her husband, stalked by Nemesis and kept in Lord Richard's sights she feels she's better off on her own. But Richard has other ideas. He's a Lord with a Special Forces background, has built a network recovery system in a Bunker and lives with an injury that makes him vulnerable at times and all the more appealing. He's my kind of hero!
The twists and turns in the story keep the reader riveted to the end resembling a Robert Ludlum or Lee Childs book except the hero is a heroine.

Legendary hacker, Dimity Pond, is on the run from the law.
Her landlord’s sold her home, her money has disappeared along with her two-timing husband, a cyber-terrorist named Nemesis is forcing her to wreak havoc with a nasty virus and she's developing a vile migraine.
Six years ago, Nemesis framed Dimity for the collapse of one of Europe's biggest banks. The money was never found, and the bank's failure caused untold damage to its customers. She's been living under the radar ever since. The only way she can clear her name and live a normal life is to uncover Nemesis's identity, but he's always one step ahead.
Since Lord Richard Summerhayes left the Special Forces he's built the best disaster-recovery network in the world, known as The Bunker. Banks, militaries, airports and other major systems around the world rely on him as the last unshakeable digital fortress in the face of disaster. Richard has been keeping an eye on his neighbor who has a dubious hacking past. He doesn't like hackers, and when someone nukes his network with an intriguing new virus he knows exactly who to blame. But when he confronts her, he gets a whole lot more than he bargained for.
When Nemesis commits an unthinkable act of terrorism, the last hope is an encrypted file that only Dimity can crack. Will Nemesis manipulate Dimity into helping him wipe out the world's biggest financial center? Or can Richard and Dimity take Nemesis down once and for all?

“Oh Sarah Easton ——” A cold digital voice mocked her. “It’s about to begin. Send the virus.”
Cold horror washed over Dimity. She jabbed the phone’s off button and dropped it on the table.
A noise, the rough grate of wood on metal, startled her. Numbers curled across her mind as a migraine inched closer.
“It’s the stove.” She spoke out loud, to break the quiet.
Beau – the labrador – cozy and content at the base of the wood-burning stove, continued to sleep as if he’d spent the morning chasing rabbits.
Which he hadn’t.
Unless bacon was involved, Beau never ran.
The silence of the house closed back around her.
She scooped up the phone, hesitating, waiting, and hoping the suffocating dread would dissipate. It didn’t. Then she hooked the handset back into its base, flicked open the dishwasher and unloaded the dirty cups and glasses she’d stacked there in a rare burst of domesticity that morning.
Someone hammered on the front door. A thick white mug, with the faded words Nerd Girl on it, slipped from her fingers, bounced off the side of the dishwasher door and shattered into a thousand pieces on the floor.
Jake? It couldn’t be him. He had a key and was in the south of France. But no one ever came to visit, she made sure of it.
The person hammered again.
“Shit,” she muttered. “This stupid life.”


Author bio
Caitlyn Nicholas began writing in 2005. Exhausted, pregnant and coping with a demanding toddler, she decided the time was right to embark on a writing  career.

To her family's eternal startlement she is now the author of five novels and a short story.

Her debut novel - and the first manuscript she had ever written - Running Scared, was published in 2007. This was followed by Secret Intentions in 2009, The Danger Game in 2012 and, Drive Me To Distraction, also in 2012.  Her next novel, Pursuit, will be out in August 2013.