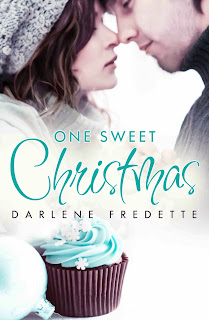 Please welcome Darlene to the blog with her new release with Escape Publishing, Harlequin Australia (yes the same guys publishing my book). Take a look at this great short story just in time for Christmas. A great gift not only for you but for family and friends. I love this cover. Don't you?

BLURB: It’s going to take more than a few pieces of chocolate to fill this Scrooge’s heart with Christmas cheer. Luckily Candice Cane has a whole shop full...

Candice Cane is not proud of the way she acted after her last encounter with Jackson Frost. Sure revenge was fun, but it’s left Jackson standing, angry and looking for answers, on the welcome mat in her chocolate shop. Now he’s after some revenge of his own.

Jackson returned to his small hometown for one reason and one reason only...so he’s not sure how he’s ended up in a Santa suit in the middle of a chocolate shop, at the behest of its beautiful owner, instead of high-tailing it back to the city as fast as he can.


EXCERPT
‘You’re late.’ She shoved the bag at him. ‘Here’s your suit.’
He stepped back. ‘Wait, you don’t actually think I’m going through with this.’
‘If you ever want to be single again, you’ll take this bag and get changed in the washroom — now.’ The children were waiting, and lack of sleep made Candi in no mood to argue.
He stood still for several seconds and then, without warning, he closed the door behind him. Jackson grabbed the bag from her hands and tossed it on the counter.
Candi held a breath.
His eyes filled with longing. His chest expanded, as if he attempted to control his breathing. Every nerve in her body tingled in anticipation. The voice in her head demanded she flee, yet her feet remained cemented to the floor. She waited — hoping Jackson would pull her into his arms.
Children’s laughter echoed from the shop and broke his advance.
‘You and I need to clear a few things that are screwy in my head but, apparently, I have a job to do first.’ Jackson shrugged out of his coat and unzipped the bag.
‘You can change...’ Candi stopped. Did he have no modesty? Jackson whisked his blue, long-sleeved shirt over his head and stepped from his dark trousers. He stood in front of her in only a black T-shirt and matching boxers.
Candi’s cheeks burned, but she couldn’t look away. He was beautiful, even more than she remembered. The thin T-shirt stretched across the planes of his chest. His legs were long and muscled. If Jackson meant to embarrass her, his plan worked. Unable to tear her gaze away, she watched as he stepped into the red pants and slipped his arms into the coat. He strapped on the pillow-stuffed belly bag and fumbled with the buttons through the fake fur trim.
The pants were a bit short, but nothing the boots wouldn’t hide. The coat fit snug across his broad shoulders and the pants clung nicely to his butt. Candi sucked in a breath and passed him a wig and fluffy, white beard. Jackson rolled his eyes, donning the fake hair, and topped off the disguise with a floppy red hat.
‘How do I look?’
He would definitely win over the children, but a sinking feeling washed through her stomach when she envisioned the youngsters fighting their mothers to see who first sat on Santa’s lap. ‘Just like jolly old Saint Nick,’ she said. But much hotter!

BIO:
An avid reader since childhood, Darlene loved to put a pencil to paper and plot out stories of her own. Her writing is a combination of contemporary romance with chick lit flare, and a main focus as a plot-driven page-turner. When Darlene isn’t writing, editing, or reading she enjoys spending time with her husband, daughter, and Yellow Lab.

At the end of Darlene's blog tour she will have a draw for a jewellry pin and a free copy of one of her two titles One Sweet Christmas or Keeping Secrets (winners choice) to any one who leaves a comment. It's as easy as that. Just hop onto her website for more details. Good luck!