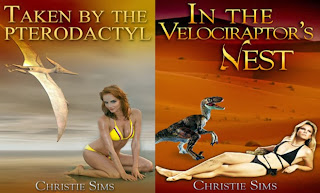 What the f$%k?
Jurassic Erotica! Yeah, you read it right. The article below, by Emily Shire from the magazine The Week, explains it all. My good friend, Annette, a Real Housewife on this blog showed me this article. She couldn't believe it and begged me not to draw any inspiration from the content for any future writing. As if!

Now, each to their own and a hearty congratulations to the ladies who are authoring these books, but just between you and me I prefer my erotica to involve the human species. Period. My current WIP manuscript CUFFS is gritty, raw and contains some pretty hawt sex, I've been known to read the odd M/M/F, M/F/F and tie me up and slap me down books by my favourite erotica authors but that's about as far as I'll go. Call me a prude. Go on. (LOL)

But seriously, please read on and discover what gets some people hot and sweaty. It might be you! Puts a real spin on the idea that 'you learn something new everyday'!


Some people have a cheerleader fetish. Others go for firefighters. And then there are those who are really turned on by triceratops sex.

Yes, the internet is known for some pretty kinky stuff. Still, dinosaur erotica is pretty surprising. So... what exactly is it? The stories are about dinosaurs, ogres, weretigers (like werewolves but, you know, tigers) getting it on with "beautiful maidens exploring their lust for these powerful creatures."

Dinosaurs and mystical monsters aren't exactly famous for getting people in the mood, but two authors, Christie Sims and Alara Branwen (pennames), have figured out how to tap into the apparently latent demand for dinosaur sex.

As students at a satellite school of Texas A&M, each woman was working part-time to pay the bills: Christie as a tutor and Alara in a supermarket. Inspired by the self-publishing success of E.L. James, Alara decided to try her hand at erotica and later got her friend involved.

However, unlike her innocent and lusty protagonists, Alara didn't walk in blindly. After doing her research, Alara realized "monster erotica" was growing in popularity, so she started writing stories for that genre. A few months later, when she was thinking about the movie Jurassic Park, "My perverse mind immediately went to work, and I pictured dinosaurs having their way with women,"she told New York.

While dinosaur erotica might not be everyone's cup of tea, it does the trick for enough people to be profitable. The two women are cleaning up while writing books that are mostly under 20 pages. They sell for $2.99 a pop on Amazon, and while the authors won't release their numbers, they said, "Combined, [we] make more money than our friend who has been working as an engineer at Boeing for a few years." Not too shabby.

A reptilian tongue, stiff and hot, dashed out to lick at the tender, naked flesh so suddenly exposed. Azog gasped at the touch, then gradually relaxed as her body warmed to the intoxicating sensation of the beast's flesh against her own

Or, if you're feeling extra frisky, here's the description of Diane in Taken by the Pterodactyl:

She fully expects to be eaten by the massive beast, but when it starts to peck her clothes away, leaving her naked, she begins to understand that the pterodactyl might have another, more deviant use for the young virgin. But can Dianne accommodate such a massive creature?

Steamy…? We're not here to judge.