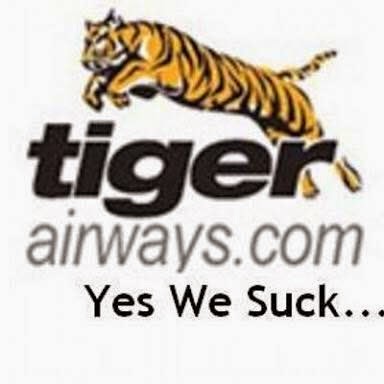 I don't often complain publicly like this. I usually just have a whinge to a couple of friends and that's the end of it. But what's happened to good old fashion service? Why do people think because they've been given a uniform they have the right to be a bitch? We are the customers. We have paid the money. Doesn't that count for anything anymore?

In a nutshell I will tell you about the gripe I have with Tigerair:

As most of you know, it's a budget airline in Australia. My family and I have never travelled on this airline before but thought that we would over the long weekend to get to my cousin's farm in Northern NSW. Budget may be it's motto but our fares were not that cheap considering we were too late ( mid February) for any red hot, super deals. Additionally, my husband, who's a big fella, wanted to travel in the exit row for the additional leg room.

We make the booking online for the whole family. My 15 and 13 year olds are classified adults. Only my daughter who is 10 qualifies as a child. We are all on the same booking reference. We then proceed to allocate our preferred seats. My husband and I in the exit row and the kids a row behind us. All cool. We pay up including a fee for choosing and being allocated the exit row seats.

On the day of travel we arrive at the airport earlier than required to ensure those seats are not given away. It all runs smoothly. There's no problem at check in. We are presented with out boarding passes with the seats we had selected when we booked the flight online. We are pretty good travellers too. No luggage to check in as we all carry our own backpacks for the weekend away. We enjoy a spot of lunch then head towards the gate to board the flight.

At the gate those with exit row seats are invited to board first. So all five of us go forward and I present the boarding passes. It is then that there is whispering and carrying on by the Tigerair staff and we are asked to step aside. We are then informed that we cannot board the flight and sit in our allocated seats because my husband and I are travelling with two dependents (my oldest son at 15 is not considered a dependent and can sit in an exit row seat). My husband says he can travel with my son and I can be seated elsewhere with our dependent children. That would work. But no. They have a strict policy that does not allow adults travelling with dependents to be eligible to sit in the exit row.  We have done this before on other airlines, albeit on international travel itineraries, with no problem.
If their policy was so strict then why were we able to not only book and confirm those seats online but also be checked in and allocated those seats?

As we argued our case and insisted on seeing the policy in writing which they never produced I noticed a Federal Police Officer hanging around watching! I am mortified that he was there for us as Tigerair were the thieves that took our money and didn't provide what they promised. Last time I looked, when you pay money for something you enter into a contract where you get what you have paid for. The Tigerair employee (I'll call her B) was tapping away on the computer obviously making notes about how difficult we were. If she had smiled the woman's face would have cracked.

In the end we had to board the flight and were seated in the row in front of the exit row with our daughter but get this, they seated our son's two rows ahead of us. So much for keeping to policy. We were informed that the reason adults with kids can't fly in the exit row is because they keep families together. Yeah, when it suits them!

So, regardless of the fact that we had paid more and were disgruntled passengers on the first flight do you think they tried to make it up for us on the return? Nope. I am sure due to "B's" notes on our booking she made sure we got the worst seats on the flight back. Row 30. The last possible row where you can't recline. Good one Tigerair.

Their policy does stipulate that adults travelling with dependents are not permitted to be seated in the exit row as we discovered post fiasco. However, why were we able to book, confirm, pay and check in with those seats? Do they think that people will jsut forget about it and not claim their refunds making an extra couple of hundred on the side?

I have lodged a complaint and await their reply. I have demanded a refund too. Let's see what happens.

Let me know if you've had any similar problems with anyone. Sometimes it's just good to vent!