Lay some SKIN on me.

Today I'm chatting with the AWESOME Kylie Scott about her new release SKIN, the story of Nick and Ros set in a post apocalyptic zombie infested world and the author behind it. 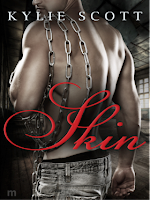 Where did you get the idea from for this story?

I had a scene in my head of a woman being voted off the island effectively, by her supposed friends. Traded to a man in exchange for supplies in a post-apocalyptic world. So of course I had to turn it into a love story because sex. Not that you can’t have one without the other but we’re romance writers, right? Love = Sex and Sex = Love. Building a believable relationship out of that scenario was a great challenge. Getting them to the point where they’d have meaningful, vigorous sex. Did I mention the sex?

I’ve always dabbled with writing. But about seven years ago I decided to get serious about it. So I wrote an overly long and wildly self-indulgent urban fantasy that rightly got spanked by a manuscript assessor. That was when I realized I actually needed to learn how to write. If you want to dabble and spin stories for yourself then that’s fine. Live long and prosper. If you want to be published then you have to understand that you’re writing for an audience. You need to learn what they want from a story.

Being lazy, I’ll often loosely base a character on an actor or model so I don’t change their hair colour half way through or something. Plus it’s a wonderful excuse to waste time on Google Image looking at pictures of hot men. Characters are often an amalgamation of people I know. Since I work off the opening scene, I try to figure out who would put themselves in such a position. Who would do this and why?

I love Nick, my hero. He’s gotten himself into such an idiotic impossible situation, bless him. Plus, he’s hot.

A bit of both. I don’t pants to the extent that I used to because I found it wasted a whole lot of time and energy. I try to have a loose plot worked out but there’s always room for maneuvering.

A bottle of Ciroc vodka with cranberry juice and soda water. Lots of ice. Why bother with food?

Closed minded a**holes. Actually, that’s a lie. A closed mind terrifies me. You need room to be wrong. That’s how you learn.

Hey Kylie, I have never considered alcohol as my last 'meal'. At least you'd go out not having a clue or if you had a hangover begging the executioner to get on with it!

Thanks for popping in and sharing. This is for you on Valentines Day- Richard Armitage.

Six months since the zombie plague struck, former librarian Roslyn Stewart has been holed up in a school with eight other survivors. But now the shelves in the school canteen are bare. The stranger at the gate has supplies that will ensure the group’s ongoing survival, but at a cost. He wants a woman.

Nick is a man with a plan. He’ll treat Roslyn like a Queen, devoting the rest of his life to protecting and providing for her. In exchange, of course, for sexual favours. It’s the deal of the century given the state of the world. But Roslyn doesn’t see it that way. The first chance she gets she attacks the ex-army man and attempts to escape, forcing Nick to contain her. And so begins his awkward courtship of the woman, with her chained to the bed for security reasons.

Chained like a dog and forced to spend her every waking moment with a creep, albeit a good looking one, Ros is determined to escape. When circumstances force them to band together against a common enemy their very survival depends on their ability to learn to trust each other. An uneasy partnership develops, but can a relationship with such a difficult beginning ever have a future?

The hotly anticipated sequel to Flesh, Skin is set in the same universe with a different set of characters.